After this fantastic tasting in Naoussa in Madedonia, northern Greece, I am gonna tell you the things I have learnt about the red wines of Naoussa. Be careful, not confuse with Naousa of the island Paros in Cyclades, also in Greece; we are talking about Naoussa-Imanthia, in Macedonia, which is sometines spelled with one ¨s¨, sometimes with two ¨s¨. 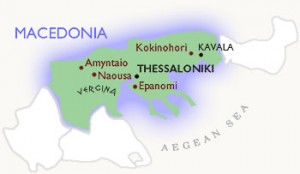 Naoussa is located on the slopes of the beautiful Mount Vermion and produces mainly red wines made out of the local grape variety called Xinomavro, and it was also one of the first AOC regions registered in Greece, which is actually a PDO (Protected Designation of Origin). 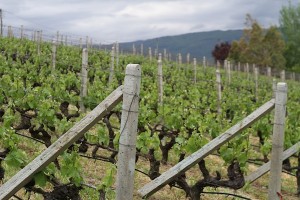 After listening to different people saying, smiling, that Xinomavro is ¨a poors´ man Barolo¨, I agree that a better approach would be to say: if you like Barolo but you can not afford it, give a try to Xinomavro wines from Naoussa, there is a big chance you will enjoy them.

Now it is time to talk about Xinomavro, which occupies around  500ha nowadays in Naoussa. Wines made out of Xinomavro, do not generally have  a lot of colour (this is the reason why, apart of the obvious similarities with Nebbiolo grape variety, sometimes it is also being compared with Pinot Noir) and on the other hand, they age really well, which is mainly due to 2 factors: the high levels of tannins (from the grape variety in combination with the ageing) and also due to the high acidity of their wines. 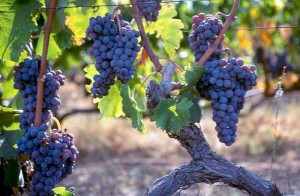 We can differentiate two main different styles of Xinomavro wines from Naoussa:

This modern style was inaugurated recently, and therefore it is yet too soon to confirm which will be evolution of the new styles of Xinomavro wines from Naoussa, although after the wonderful tasting I had the pleasure to attend to in Naoussa, I can already assure that they are really promising.

Other AOC’s of Macedonia are: Amyndeon (high vineyards and the coldest ones), Goumenissa (where wines of Xinomavro and Negoska are produce) , and Rapsani (the warmest appelation of Greece by the foothills of the mount Olympus ) 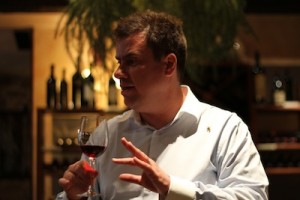 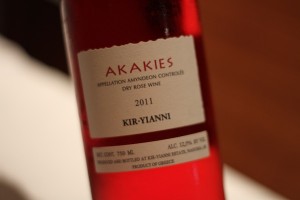 The unique rosé wine of the tasting and the unique Greek PDO rosé. Lets remember that Amydeon is the coldest part of Greece, and so far the only actual PDO where a rosé can be elaborated with Xinomavro and be inside the appellation. Vineyards from sandy soils and 700meters of altitude.

It has an intense and attractive deep ruby colour and aromas of red fruits like wild strawberries, some black olives notes, and even a lime peel touch. A really refreshing medium-high acidity, medium body and dry finish. A wonderful start of the tasting. 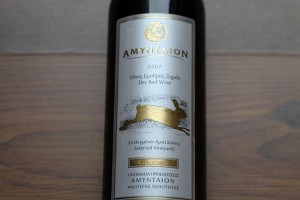 This is a selected Cuvée from the Cooperative of Amyndeon, with a tawny colour, and aroma of violets, plums and some spinach-like notes, good medium body, high acidity, well integrated tannins. Could I think this is a great Barolo? Definitely yes. 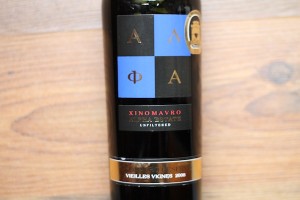 This is definitely a representation of the new style. Alpha Estate is famous for the use of a lot of new oak, long pre-fermentative macerations to get more colour in the wine, exactly as it shows. We find also the classic dried fruits notes, sun-dried tomatoes. Lets remind that it comes from the other part of the Mountain of Naoussa, which is much colder place, and it comes from old vines and prephylloxeric ones, from sandy soils with less that 2% of clay content and therefore, immune to the Phylloxera insect.

This is a really well rated wine by ¨The Wine Advocate¨ and with a lot of international recognitions. 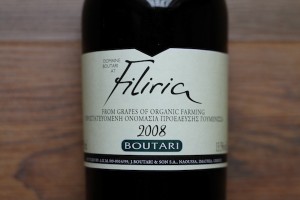 While all the wines PDO Naoussa must be 100% Xinomavro, the red wines in the PDO Goumenissa must me a blend of at least 20% of Negoska grape variety with Xinomavro. We are in front of a greek Organic wine. 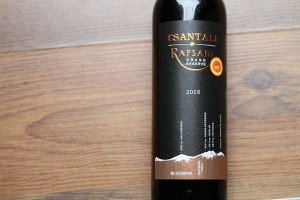 This is a wine with a great ageing potential and also made out of the local grape varieties of Xynomavro, Krasato and Stavroto on the south slopes of the Mount Olympus. Grand Reserve means that it has been at least 18 months in oak barrels and 18 months in the bottle. I must admit that I found this wine a bit reduced on the glass, but started opening with aeration.

It has a deep dark ruby colour with tawny hints, on the nose aromas of black cherries and blackcurrants, with some slightly vanilla and smoky notes. On the palate is complex and powerful, with a good structured body. A wine that may age really well. 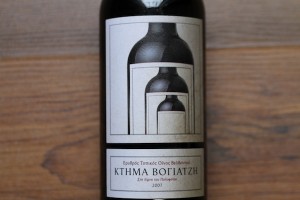 Velvedo is close to a lake south of Naoussa, and it has been found that the most important clone of Xinomavro comes from this vineyard, from the head winemaker of Boutari.

The colour of this wine is deep dark red cherry and shows an intense nose of cassis, dried dark berries and some vanilla notes, on the palate repeat we find the same notes together with raisins and dried red currants. Complex, long and with well integrated tannins.

This wine one was not supposed to arrive to the tasting, as a 100% Xinomavro was expected, but it was really interesting to check it out, as it is a really well made wine, with a really commercial character. 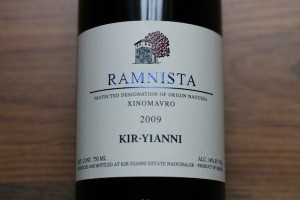 Yiannis Boutaris helped a lot to the revival of the Naoussa Appellation and create the first Estate vineyard in Yianakohori in the late 1960’s. In 1996 he left Boutari Company to his brother, Konstantinos Boutaris, keeping the vineyards of Yianakohori and Amyndeon, to establish his new company, Ktima Kir Yianni.

A really deep cherry colour with violet and tawny rime, intense aroma of red fruits, ripe plums, spices and black olives. On the palate is powerful, high in alcohol sensation and in acidity, very robust. With this wine we suffered an attack of hungriness and said that we would accompany it with a roasted lamb and rosemary. 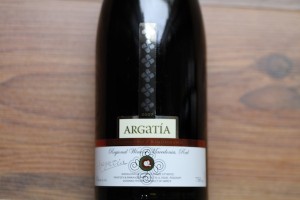 Domaine Argatía is located at the north west of Naoussa, in Rodohori, at 540m of altitude, founded in 2000 by Panagiotis Georgiadis and Dr Haroula Spinthiropoulou, both specialists in viticulture.

Deep ruby colour with tawny rime. On the nose intense aromas of cherries and wild berries, with sun-dried tomatoes, violets and some dark chocolate notes.  On the mouth, a big presence of ripe tannins, with round powerful body and long finish. A wine that I would keep for enjoying it with time. 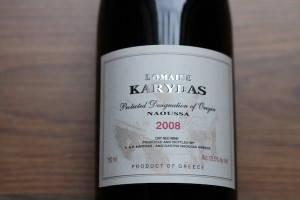 Domaine Karydas is one of the most well known vineyards in Naoussa, of around 2.5 ha and at 205 m. of altitude.

The vineyards where planted in the 1980s, and in 1994, the winery was built in the middle of the estate, and they started to produce their own wine, of an average production per year of 15,000 bottles. The founders, a family, Konstantinos Karydas and his son, Petros Karydas. We had the pleasure to meet all the family and taste their wines with them. A total revelation, of top quality wines and the most honest attitude to viticulture and winemaking. Their wines have a more fruity profile but combined with traditional winemaking and a great ageing evolution. Petros is also a ski trainer, interest also shared with his father. 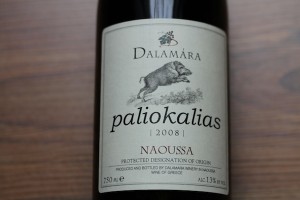 100% Xinomavro aged in oak barrels for 12 months. Better to decant it before serving. Classic aromas of raspberries, and from black olives to sun-dried tomatoes, high acidity, high tannins and powerful body. This winery is also known to be one of the traditional style of Xinomavro wines from Naoussa, it will benefit from ageing in the bottle. 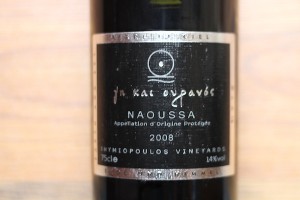 This is one of the 100% modern style, with much more presence of red fruits and concentration of black fruits like blackberries and blueberries. On the palate, really high tannins and crisp acidity but I would say that a really promising future and a very modern style.

Domaine Karydas and Thymiopoulos are the two wineries from Naoussa with more success in the USA and international recognition at the moment. 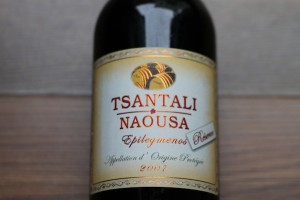 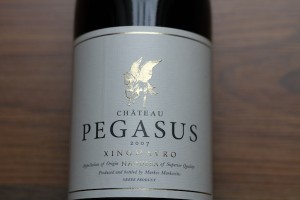 Markos Markovitis, the young wine-growing engineer from Baden-Wurtemberg continues with his family tradition and make (together with his father Dimitri) this biodynamic wine in Polla Nera, in Naoussa. Deep cherry colour with violet rime. Wonderful and complex earthy-like wine, elegant and refined. Moderate ageing in barrel and ageing in bottle for at least 6 years on the property before going to the market. 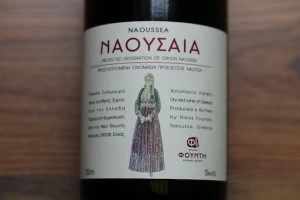 This is a traditional winery, at 4 km outside the city of Naoussa. The owner, Nikolaos Foundi started the production of his first wine in 1992. A really well structured wine, with one year in the barrel, medium body, and long finish. A perfect traditional style of Xinomavro from Naoussa. 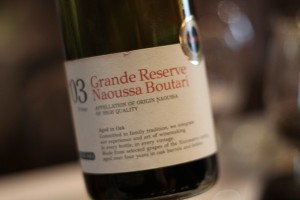 A deep red cherry colour with an orange-tawny rime. Really elegant aroma of dried fruits, tomatoes, figs, with some vanilla and spices notes. On the palate is silky and with a well integrated high acidity and ripe tannins, with balanced and medium-long finish. A wonderful wine, ready to enjoy, complex and pleasant.

The price of the kilograme of grapes inside an Appellation in Macedonia can be around 0’35eur (and even 0’15eur out of an Appellation, a big difference for for Assyrtiko in Santorini inside Appellation which can reach even 1,20eur/kg), and being inside an PDO  is of real importance in terms in order to get the EU subsidies.

At lunch time, we had the pleasure to taste Domaine Karydas 1995, of which it may be left only 12 bottles out of the 12.000 of the original total production. We decanted it, and it was a delicious way to finish the day, and a proof and reminder of the amazing potential for ageing of Xinomavro wines from Naoussa, and the extremely good value for money, as you can find elegance and a wine that gives you much emotion for a really reasonable price.

Something that it is possible to happen with time: Some studies of the different clones of Xinomavro are suggesting the capability to reflect the terroir where is planted. This idea of establishing “single vineyards” or even a “grand cru system” inside the Naoussa appellation may be a something that will happen in the future.

Many thanks specially to Hans-Peter Siffert (Weinweltfoto.ch)

for the workshop on photography and ¨the master becoming an assistant deluxe¨ to make possible these photos, and also to Alicia Mettler (Mettler-Vaterlaus), Yorgos Papapanayotou (hepo.gr), and to all the unforgettable people I have met in this outstanding trip 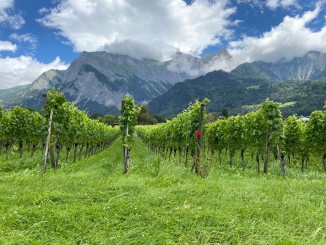 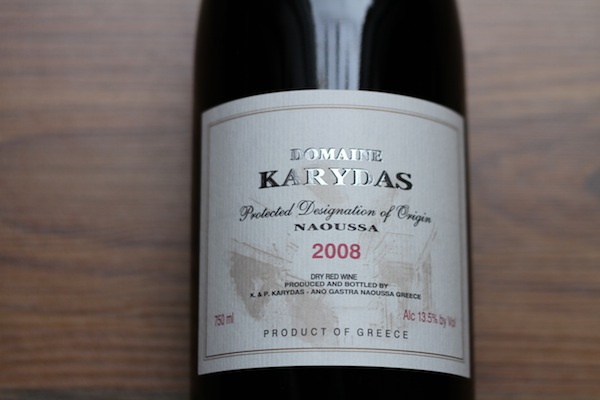 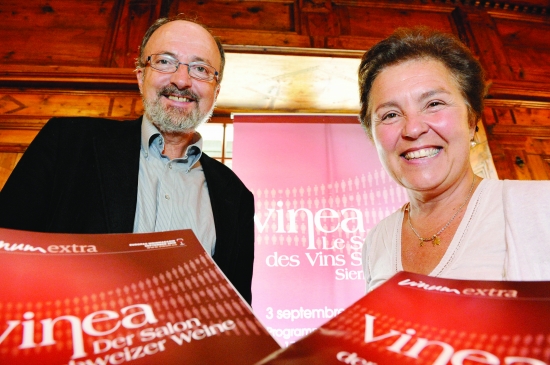