A Taste of Chillida

There are conversations that inspire you, that make an impression on you and that totally hit you. There is nothing more beautiful than listening to a son talk about his father with deep admiration, and if that son is Luis Chillida, it is even more exciting.

What a surprise, arriving at the Chillida-Leku past 25th of april in Donosti for a vertical tasting of 10 vintages of Le Domaine Blanco from Abadía Retuerta, which already promised to be unforgettable and also, to meet Luis Chillida for a walk around Chillida’s place (literal translation of Chillida-Leku) and learn first-hand about the life and work of his father Eduardo, the famous Basque sculptor who created the ‘Comb of the Sea’ in Ondarreta, and so many other amazing sculptural works. 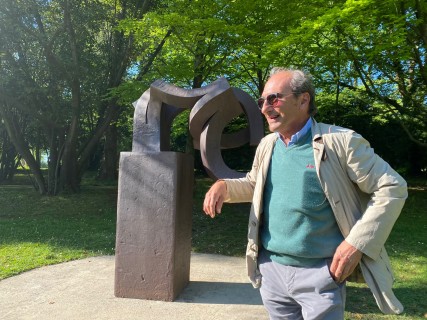 Luis Chillida, in front of a work by his father Eduardo Chillida in Chillida-Leku

Eduardo Chillida (1924-2002) decided many things in his life, discarding what he did not want to be, as happened to him with architecture, which he soon became disillusioned with along the way. At other times, fate made decisions for him, as when he was 19 years old and a sensation at Real Sociedad as a goalkeeper, an injury forced him to give up football, which allowed him to pursue other, more artistic pursuits.

When he started working in Hernani, where he moved with his family, he came across iron, which introduced a fundamental change in his career.

For him, learning consisted in the repetition of confronting what you don’t know how to do. You need to open your mind. Are you familiar with the idea of getting out of your comfort zone? Well, that’s what it is! You have to dare more, and you have to be less comfortable.

It took him 26 years to make the ‘Comb of the Sea’ (Peine del Viento) since he had the first idea, walking by the sea with his wife Pilar Belzunce. We ask ourselves, what is time in reality? It is nothing more than something elastic and relative. All we have is the present. Are we stressed? Well, time to relax, to breathe deeply and to savour time.

Chillida worked being conscious of the value of what he did, not the price. Well, what luck some people will say. But let’s not forget that to do the impossible, you first have to dream it.

Chillida never wanted to make replicas of his works and only ever agreed to make a maximum of 10 replicas. He called himself a ‘ruminant’, Luis tells us, as he took his time for everything. Something that is very difficult nowadays, as we live very fast, and that would be good for all of us. To take possession of time. To stop it. To savour it.

So he decided not to make reproductions to reach the masses, and he had a great idea, to place one of his works in a public space, where everyone is the owner, a revolutionary concept for the time, back in ’57, the beginning of public works.

Eduardo Chillida wanted to be freer, not to limit his works to having to make something small in order to exhibit them, so he found what he called his little Basque Country (Chillida-Leku), a space without limitations, where he could express himself and exhibit his work.

In the summer of 2021 I saw a fabulous concert of The Jayhawks from Minnesota in Chillida-Leku, with a glass of wine and hammocks, a marvel, Eduardo would have been proud, even if his favourite music was Bach.

And now we go to the incredible tasting of 10 historic vintages of Abadía Retuerta‘s Guarda white wine, Le Domaine !

The fruit of chance or destiny, like all great things, as some white grape vines were planted in the middle of a red grape vineyard by mistake. Initially they thought it was Merlot, but surprise! Sauvignon blanc was there to stay and to become one of the great whites of Spain, fruit of the union with a Verdejo blend. From the sun-drenched Pago de la Raya, with natural water reserves, the terroir of sand and pebbles produced a marvel.

It is always a pleasure to see Enrique Valero and Álvaro Perez Navazo, and my father gave my regards to them and to the Navarran winemaker Ángel Anocíbar. And on top of all that, we sat with my partner in crime in Mugaritz,, Kristell Monot alongside with two Rekondo ambassadors, including Iñigo Galatas, and members of the friendly tasting group called the Irrekonductibles, and also the charming Enrique Larumbe from Eurogap. What a team we have put together and what a luxury tasting. After Enrique’s passionate introduction, Álvaro’s explanations were impeccable with mastery and patience.

Well, the Sauvignon blanc was introduced by a kind of error in his vineyards, blessed mistake, because from then on they kept on growing, the experiments started later. Le Domaine Blanco usually has 70% Sauvignon Blanc and 30% Verdejo, and 7 to 8 months in French oak barrels. Let’s go to the tasting impressions, although I have to admit that I concentrated more on enjoying them to focus on the present, as Eduardo would have done. It is not every day that you taste magnum bottles of whites wines with such style!

2011 : Extreme intensity, vanilla, butter and fine, creamy pastry, with a touch of turmeric. And yet, a freshness on the palate thanks to the acidity. At first it reminded me of the aromas of a Tokaj. It was a warm vintage. I can see Kristell’s eyes, it’s her favourite! And so it is for a lot of people.

2012 : Apricot, honey, flowers, a touch of menthol and much more freshness, very long and dynamic in the mouth, this is more my style! It was harvested earlier and with 50% of used barrels.

2014 : On the nose it keeps the aromatics of house, and on the palate lighter and fresher, citric and aromatic.

2015 : On the nose it still has that a slightly tropical complexity, but in the mouth it has more volume, also very fresh.

2016 : It rained in spring, with more production, more heat. Aromas of dried apricots and warmth on the nose and more weight on the palate 14% (instead of the usual 13.5%).

2018 : Again fresh and minty, more mineral. Product of a cold vintage with sunshine at the end.

2019 : On the nose, it maintains the house style. More electric, on the palate, lots of freshness even though it is a warm vintage. Slightly pétillant.

2020: The year of mildew! Yes, it was not only the year of Covid. There was a lot of humidity and temperature, they decided not to treat the vines. They were right as the fungus did not reproduce, luck or destiny! Good volume in the mouth and good production. 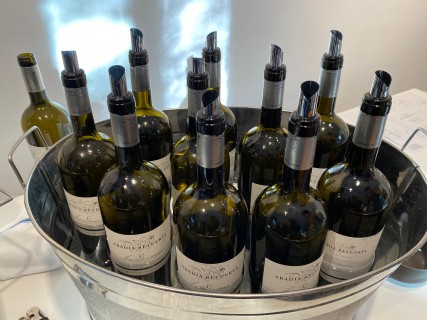 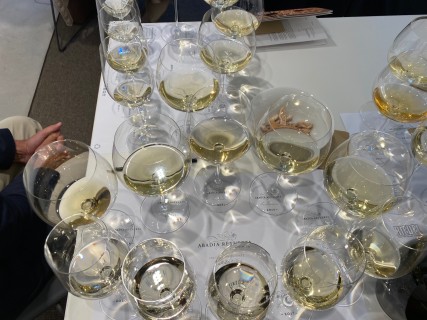 To top it all off, we finished on site sitting on the terrace with chef Marc Segarra from El Refectorio in Valladolid, who was there to make us taste some of his creations after the tasting.

And here we are each one of us with our favourite glass of Le Domaine in hand and these ephemeral and delicious kandinskians gastronomic art pieces. With Mondays like this, the weeks are unforgettable. 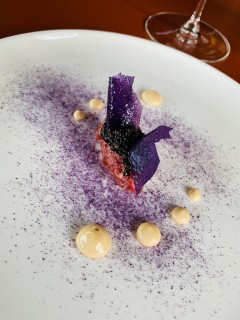 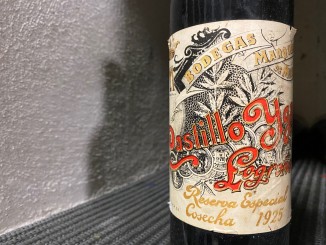 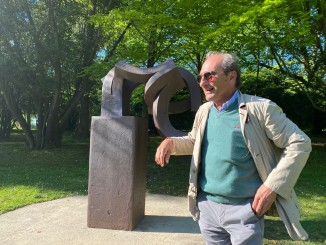