In the northern hemisphere, it is necessary to defend the vineyard in a normal year from a multitude of pests, as mildiu, the oídio, botrytis, araña roja, etc. In May at this time it begins to activate the moth in the bunch.

It is a butterfly of 15 millimeters in size and 8 length mm. The female is larger than the male. The forewings are yellowish, crossed by dark transverse stripes. At rest the wings cover the roof-shaped body.

Their eggs are less than 1mm, rounded and straw. With the temperature rise becomes a greenish larvae, which soon go form a white cocoon (overwinter) in the bark of vines strains. With the heat, in spring, they transform into butterflies with the square head and chest blackish,  and slow movimentos. Which does not stop them once fertilized by the males from making, each female, a throw from 50-80 eggs, over the flower buds on the vine, dying in the first place the male and female soon after. Usually they happen from 2 to 3 generations of moths,  in every season, depending on the weather. 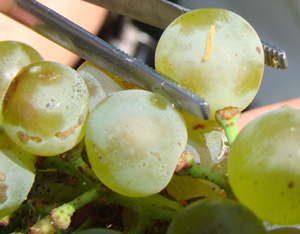 The larvae feed on the flower buds that are closer, and on the flowers in general. They agglomerate with a silk a kind of nest and at the end of the larval period, generally in the same cluster, but may do so elsewhere. This way it is born the second generation of adults, and the female once again fertilized put the eggs to another generation, that by breaking again in larvae feeding on berries, at hatching in greater numbers multiplying, the damage caused rises. 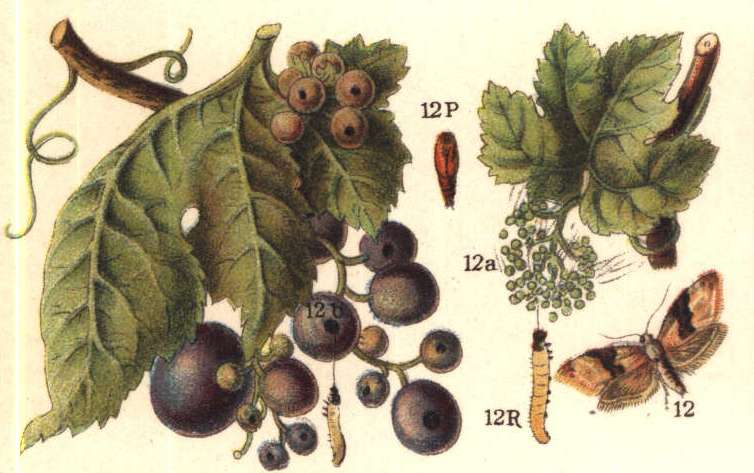 When they reach their development migrate to winter shelters where they spin a cocoon and pupate. The agglomerates of silk and the larvae are easily detectable, and their destructive effects onto flower buds, and later in the decay of berries in bunches, with loss of a part of the harvest, and affecting the remaining quality. For its development needs temperatures above 20 º C and high humidity. In long-cycle varieties is where the damage produced is higher.

To combat the moth in the buch, it is successfully used the “sexual confusion”. Males to fertilize females, first they use the the smell, so they can localized them- and immediately fertilized. If we spread throughout the vineyard, the female sexual complaint, the males go dizzy, and go crazy with so much pheromone (The Pheromones are chemicals secreted by one species to cause a particular behavior in another individual of the same or other species), that is distributed throughout the vineyard. It is very easy to handle, and externally are like closures (laminated metal), similar to those used in bread bags, easy to distribute and place. Still, always there is a dizzy male that by chance cross with a female, and zas! 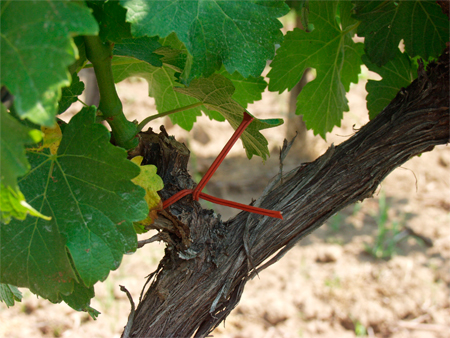 To track the number of moths, we can put some traps, that are like a little tent, where we put on the floor inside their female sexual complaint, on an adhesive paste where the male goes, and the male gets trapped, and thus, counting the number of trapped males, we can realized the success or failure of the operation, in each generation moth. So we can see the need or not, of distributing more bread-type locking hooks. 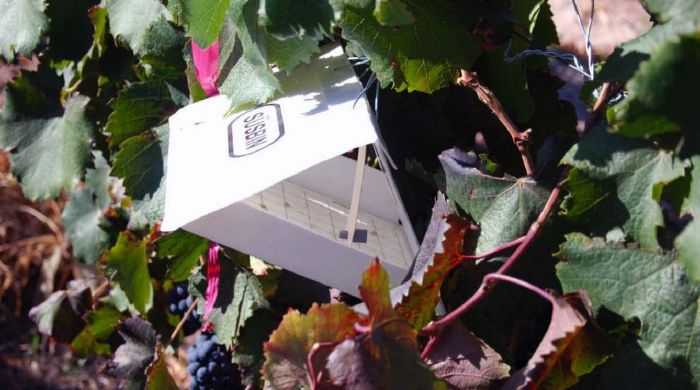 The method is effective because it reduces the larvae population to tolerable levels without the need of making any other treatment. Respect the environment, wildlife and labor-saving.